The birth and development of Kropa 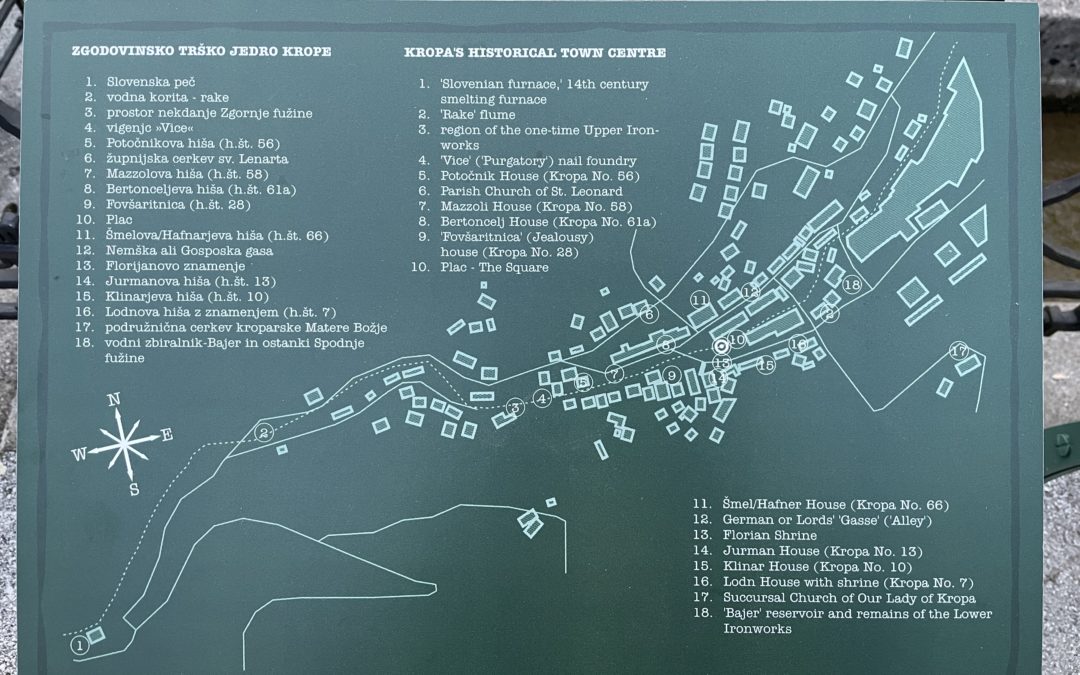 “And with nails, drops from their hearts. they carried their name across mountain paths and white roads to far away cities” – J.Lavrencic

The birth and development of Kropa is intimately entwined with iron, fire and water. During the late middle ages, an iron settlement was established on land owned by the noble Ortenburg family next to a seasonal torrential stream running through a narrow ravine beneath the Jelovica plateau – an area rich with iron ore and abundant forests.

The oldest archeological remains from the region date from the period of antiquity, however, there is no proof a permanent settlement existed before the 13th and 14th centuries when the Ortenburgs began to encourage mining activities in thé area, the construction of a smelting furnace and colonisation. During this period, Kropa iron workers smelted iron ore in the Slovenska pe¢ or the ‘Slovenian Furnace’ located near the source of the Kroparica stream.

From ore to nails

Ownership of Kropa was transferred to the Habsburg imperial family in the second half of the 15th century. Over the next hundred years Kropa’s iron industry took shape, centred around two furnaces, an ‘upper’ one at the the southern end of the town and a ‘lower’ one further north as iron workers, miners, charcoal-burners, blacksmiths and freight era Kaas) began to create the town’s story from ore to nail. In 1550, the future emperor Ferdinand I awarded Kropa special mining and iron-working privileges, elevating the settlement to an independent iron community under the direct administration of the emperor and headed by a mining-ironworks magistrate.

Kropa achieved the summit of its development in the 18th and in the first half of the 19th centuries. Kropa’s ironworkers transported the nails they made (in more than 100 different types and sizes) mostly over the Jelovica plateau, Selca Valley and beyond through the Baca ravine to the northern Adriatic seaports. Nails made in Kropa were well known and highly regarded across the entire Mediterranean region. As the local economy grew the region’s population increased. The lifestyle, cuisine, customs, habits, language and even dialect of the settlement’s residents were intimately connected with the day-to-day needs of the iron industry. During this period the architectural character of the town centre as we know it today was definitively formed.

This prosperity was followed by a prolonged crisis with the decline of the traditional iron industry after 1860. The aging smelting furnaces, distance from the nearest railroad and raw material sources, were not able to compete with foreign machine-made nails.

In contrast to the economic decline, this was also a period of cultural and national political rebirth, as schools, public reading rooms and amateur singing and drama groups were established. In 1894, a handful of former high-level iron workers, land owners and other local businessmen, and blacksmiths founded a nail manufacturing co-operative. After moving to industrial manufacturing, the Zadruga (later Plamen ).

This Nail Co-operative halted the economic decline in Kropa and in the neighbouring regions, and continued the iron-working tradition.

In 1953, Kropa’s town centre became the first area in Slovenia to be protected by law as a cultural and historical monument of national significance.